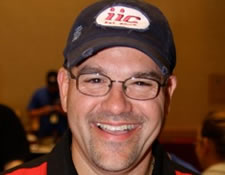 With Round 1 of the Asian Onroad Championship in Shanghai complete and Round 2 in Melbourne bearing down on us, we talk to Scotty Ernst about F1, the AOC and his life as an RC race promoter.

RC Formula1: How long have you been racing RC cars and have you ever raced F1?

RCF1: What are the highlights of your racing career?

SE: Highlights, wow, I guess I will have to go a ways back in the file cabinet for that. Lets just say I had a great life when I was racing full time, I had won many events back in the days, Tamiya US Champion, US National Champion but just had fun racing a lot. Probably the biggest Highlight was taking a young kid named Paul Lemieux around with me in the late 90's traveling to all the races and watching him grow into the great racer that he has become. For sure that is the biggest highlight for me.

RCF1:  Are you a full time RC race promoter or do you have a day job?

RCF1: How did you get started as a race promoter?

SE: I have announced and organized events at my Hobby shop Trackside Hobbies since I opened in 1993. As I traveled around the US racing, track owners would ask me if I would announce some races for them while I was there.  Then in 2001 Mike Reedy asked me if I would like to be the Announcer / Race Director for the Reedy Touring Car Race of Champions.  He brought me out there and that was the beginning of my professional career as a race announcer. Then I started doing the organization and promoting for the event as well as other events.

RCF1: What race series do you arrange?

SE: I currently organize the Asian On Road Championships www.aocrc.com,  The Short Course Showdown Nation Wide Tour www.shortcourseshowdown.com, I am also partners in the Euro Touring Series www.eurotouringseries.com, The Euro Offroad Series www.eurooffroadseries.com and my major event I produce is the International Indoor Championships "IIC" in Las Vegas www.intchamps.com

RCF1: What gave you the idea for the Asian Onroad Championship?

SE: Through the years as I traveled around the world, many companies in our industry asked me to get something going within Asia, so after much planning I was finally able to get something set and get the ball rolling. [Read our race coverage of the Asian Onroad Championship Melbourne Round 2 starting here]

RCF1: For the AOC in Melbourne who will be the race director? What timing software will you use?

SE: I will be the Race Director/Announcer for all the events.  For timing we will use RC Scoring Pro.  We are also going to broadcast the event live on the internet via www.liverc.com So no matter where you are in the world, you will be able to be part of the event.

RCF1: Which team or driver do you support in full scale F1 and how do you rate their chances in 2013?

SE: Unfortunately these days I am so busy that I have not been able to really follow F-1 like I had in the past. I miss watching the races and really following the weekly news about the series.

RCF1: Australia is enjoying renewed interest in RC F1.What would you recommend we consider in order to best grow the class here?

SE: I think keeping the class simple is the key,  Don't let it get too complex and have an avenue for new racers to grow in the class.

RCF1: Do you have any  companies or people that have been key to your RC career that you’d like to thank?

SE: Wow that is a tough question for sure. I have been very blessed in my racing career as well as the hobby shop and event promotion business that the industry has really supported me in all my endeavours. So I am very thankful to so many companies and people. But there is for sure 1 man who really changed things for me in my life and that was Mike Reedy.  Mike was a great man and affected so many people in this industry and never asked or wanted any accolades.  He just loved racing and had a passion for it that was second to none. We celebrate what Mike was to all of us each year at the Reedy Race and to be asked to be part of that event each year is the biggest honour I could receive. It is the best way any of us can say thanks to a great man.

SE: I just want to thank you for your great site and work in promoting F-1.  I am very excited to have the F-1 class be a big part of the AOC and Round 2 in Melbourne is going to be something really special. We are all working very hard to make this event the best event possible and hope that no matter what your ability is, you will join us in the fun and excitement we will have doing what we all love so much.  Racing RC.

This interview was published in Racing Lines Magazine August 2013 issue #203 on page 37.