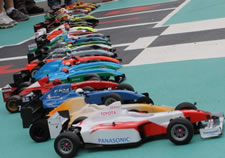 How many F1 cars can you fit on a track? In June of 2012 the F1 RC Club of the Philippines put 25 cars on the track and it looked so cool that we wanted to do something similar in Australia. In Aussie slang we "gave it a go!"

We had planned to try it on April 14 but unfortunately the weather did not co-operate. So last Sunday 14 May we tried again. Unfortunately it was Mothers Day so numbers were always going to be down but luckily for us there were enough keen F1 drivers (who would pay for it later with their Mothers' I'm sure) who turned up and had a lot of fun. And yes we broke the record - just!

29 cars took to the track but only 27 finished so we beat the old record by 2 cars - a razor thin margin!!

But we had a great deal of fun and everyone had grins from ear to ear as nearly 30 cars rubbed wheels around the TFTR track in Melbourne.

Special thanks to those who provided extra F1 cars for others to drive and experience the magic that is F1! Tim Donoghue (9 cars - now that's commitment!), Dave Stevens (3 cars), Sam Lau (1) and John Papagrigoriou (1).

Smashed by the Italians!

We held the record for two whole weeks before it was smashed by the Italians! You can read about it here.