RCF1: What are the highlights of your racing career so far? [generally and in F1]

FC: Winning the 1992 ROAR Modified 1/12th scale Championships edging out my R/C driving heroes Joel Johnson and Tony Neisinger is the first highlight to come to mind. While I am probably older than both Joel and Tony, when I started racing at age 23, Joel and Tony were the established 1/12th scale stars of the sport at the time I started.

Another "highlight" was making the IFMAR World Championship A-main for Nitro cars in Cincinnati in 2002 as well as finishing top American at the Worlds in Mexico in 1997, just missing the bump spot in the semi final losing by 3 meters to some young unknown (at the time) driver named Daniele Ielasi. I also won 2 additional ROAR National Championships in Nitro racing in the late 1990's.

FC: I had a Tamiya Road Wizard before designing and making my own cars. The first CRC F1 car was the Power F1 in 1996 and much like the current CRC F1 car, the Power F1 enjoyed a perfect first outing. I designed the car on CAD the week before the large annual race in Cleveland, Ohio, the U.S. Indoor Championships. The car had an inline battery, no t-bar, links, nothing like the cars that were currently available then. We were to leave for the event on Tuesday. We cut the chassis on the Saturday before the event and built the car Saturday night. We tested the car the next day (Sunday) and packed it up for the event. Exactly 1 week later on main day at the Cleveland race, I won the A-main from 2nd qualifying position. A magical first outing.

RCF1: Why did CRC stop making your earlier F1 car?

FC: F1 started as a support class to 1/12th scale in the late 1990's. The class was growing slowly despite rule inconsistencies; some tracks allowing 1/10th pan tires and others allowing only F1 or 1/12th tires. Back then, F1 was all foam. Touring cars were starting to get popular at that time and they grew quickly, taking drivers from the F1 ranks and practically ending F1 racing in the US. 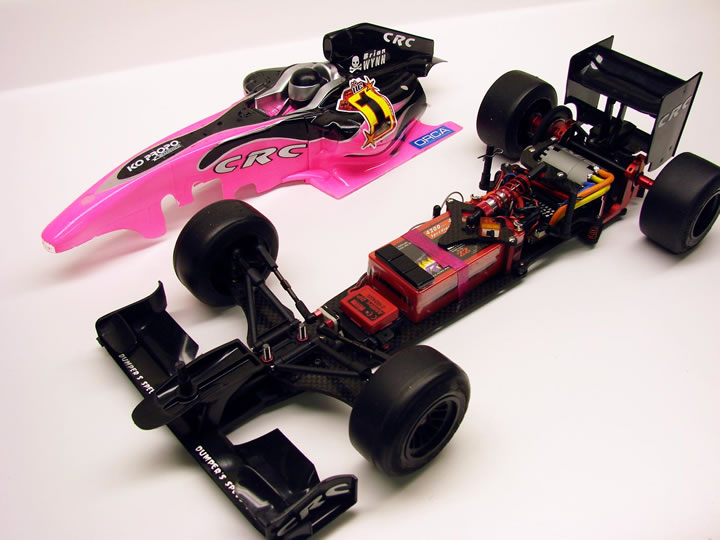 RCF1: Please describe how you went about designing the CRC F1?

FC: I called up the original files from our first F1 car, the "Power F1" made in 1996. To my surprise, the front-end hole pattern established by Tamiya with the Road Wizard in 1990 was STILL being used in 2013. I used this pattern on our 1996 Power F1 and carried the hole pattern over to the new 2014 CRC F1 car. That was the design canvas for the new WTF1.

RCF1: What were the main things you were trying to achieve with this design?

FC: Performance, ease and lightweight with versatility. The CRC F1 car needed to be adjustable to handle the variety of conditions it will encounter. From super high grip like the IIC (Las Vegas) to lower grip conditions like untreated asphalt, the CRC F1 needed to adapt. In addition, the car needed to be easy to adjust and lightweight. All 3 CRC cars at the IIC needed lead ballast to reach minimum weight rules.

RCF1: How much does your 1/12th scale design experience cross over to F1?

FC: Every bit of it. I certainly tapped into the 30 years of 1/12th experience to help get the CRC F1 started in the right direction. Back in 1996, CRC had the only link based F1 car which of course was based on our Carpet Knife 1/12th cars. Most of the design principles, geometry and chassis dynamics carry over from 1/12th scale. 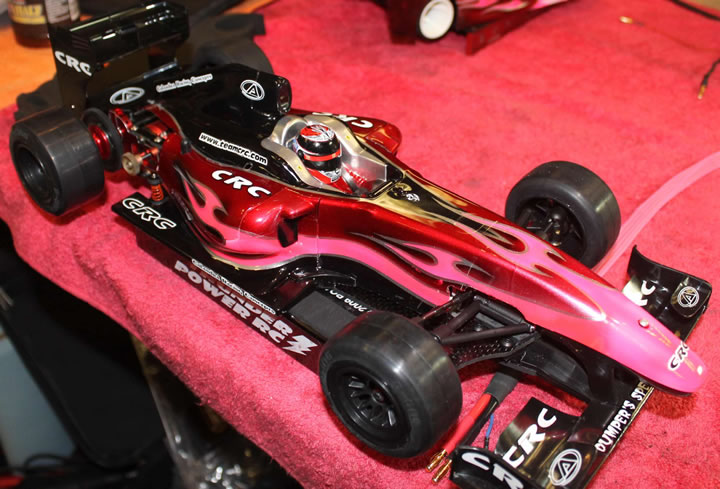 RCF1: Tell us about the first outing of the CRC F1 at IIC?

FC: Practice for the IIC started Tuesday, October 8th, the first prototype car was built 5 days earlier on Thursday, October 3rd. We had a total of 3 cars there; Brian Wynn, Mario Ficco and myself. Brian and Mario ran some testing at the 5280 "Mile High" track in Denver the weekend before the IIC to shake out the car and get a base setup. We needed to be sure the parts would hold up and perform. We made so many parts just a few days before assembly, new rear slider pods to handle the large diameter F1 tires, new pivot balls, carbon parts and front end pieces, a fairly large undertaking.

When we hit the track in Vegas, the CRC F1 cars were leading the practice times. Brian Wynn was seeded first in practice and won all 4 rounds of qualifying to set T.Q. We qualified 1-3-4 and finished 1-2 with Mario taking the victory after Brian was taken out by a back marker on the last lap. Poor Brian lead every lap of every qualifier and the main, except for the last lap of the main. Brian held on for second. Just like the 1996 Power F1, a magical first outing for the new CRC F1.

RCF1: When are you hoping to release the CRC F1 and why is it called the WTF1?

FC: The in house name for this car was the "WTF-1". The name came from the other employees in the shop watching me measuring, studying, designing and machining parts for the new car. Many times I would hear "What the F%&# are you building over there?!?!?". After a couple of remarks like that, the WTF-1 name started to stick. Looks like we will call the new car the CRC WTF-1, of course standing for Works Team Formula 1.

Release date - tough to say. I could tweak and change the design forever. I like to say; chassis designs and the creative part of making products is really never finished, only deserted or abandoned. And typically, they are only abandoned due to the reality of getting the product to market. With that said and combined with a very successful launch, I plan to "abandon" the design phase of the WTF1 in early November and hope to get the car released by January 2014. 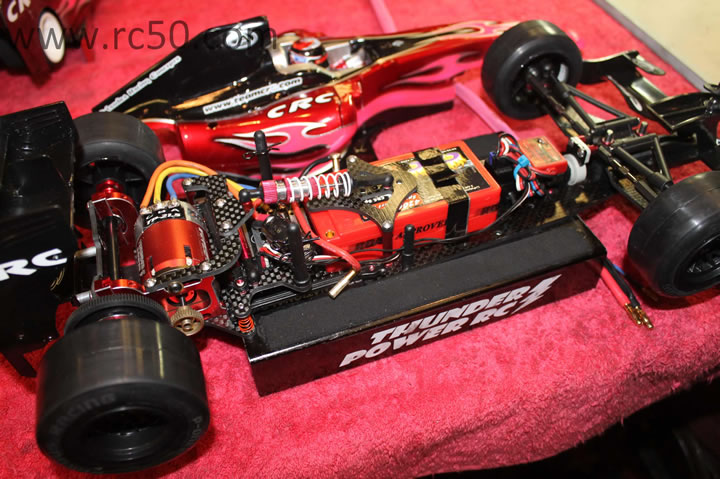 RCF1: Why did CRC develop your racing carpet products?

FC: First and foremost, I am a racing junkie. First motocross, then model cars, I enjoy racing. In the cold Northeast USA, indoor carpet racing was a perfect avenue to enjoy racing while cooped up inside. In 1989, I started to develop carpet specific to model car racing after my local track received the wrong product. We couldn't even race on the product that the local track ordered, and the owner did his best to get the "right stuff". I went on a mission to get the correct product at our local track. I began to work direct with the carpet manufacturers to get the product correct for model car racing. During that time, we were installing new and different race carpets at the local track almost monthly. After a number of re-designs, we had a great product specifically for model car racing. Since then, with the increase in speed, traction and power of R/C cars, we have had to significantly increase the strength and alter the manufacturing processes and design of the carpet to keep up with model car use.

RCF1: Do you believe your F1 car would have an advantage over other F1 cars when running on CRC carpet given your intimate design knowledge of both products?

FC: I would like to say yes to this question, but really it does not give us an advantage. One thing I have learned in racing, just when you think you know it all and have seen it all, things change and become different. CRC carpet in Vegas this year had great traction, the same carpet in Germany for the Worlds had no traction and yet again the same carpet at the Worlds in Holland had different traction. The additive used varies from event to event greatly influencing the response from the racing surface. Therefore, while I enjoy an intimate knowledge of the racing surface, humidity, additive and temperature play such a large role, no advantage is gained and much like the other race teams, we need to respond to what we are dealt with.

RCF1: What do you think the highlight so far in 2013 has been for RC F1 and is there anything in particular that you are looking forward to in 2014?

FC: We jumped into the F1 market because it looks to be making a come back. In addition, the F1 design is pan-car based, and flat chassis pan-cars are our specialty. Obviously, with the 2013 IIC getting such a good turnout and our new car doing so well, for me, the highlight for 2013 is this event. For 2014, I would like to see the world get together with F1 rules. One club is 180 mm wide, the other 200 mm and then here, 190 mm. One is foam and some are rubber. I think one of the reasons that F1 is growing here is the use of rubber tires; easy, no truing, long life. However, I did notice that these 2wd cars are not the easiest to pilot around slippery tracks with rubber tires, placing a premium on driver skill and potentially alienating a number of new drivers. In summary, it would make life easier as a manufacturer, and better for the racing public, if all the various sanctioning bodies would come together with one set of unified rules. We are focusing on 190 mm wide with rubber tires.

RCF1: Are there any plans to bring out an RTR or ARTR version of the CRC F1?

FC: Too early to say, but not at this time.

RCF1: Which team or driver do you support in full scale F1 and how do you rate their performance so far in 2013?

FC: Being an American with Italian decent, I pull for the Ferrari's. I credit Ferrari for trying to do as much as they can "in house" They make the car, they make the engine. Unlike other teams that depend on an engine manufacturer, Ferrari controls their own destiny and power. Sometimes with great results (early 2000's), sometimes struggling a bit (trying to keep up with Newey's creations). But imagine if the Red Bull made a bad decision/deal with an engine company that didn't deliver or had bad reliability, the brilliant car Newey designed may not be so successful if the contracted engine didn't deliver the performance. Ferrari's total package puts more pressure on them but they are rewarded with control of their results. Within our financial bounds and abilities, I like to do the same with CRC. We make the chassis, suspension, shocks, tires, batteries and are involved in the bodies. Much like Ferrari, this puts pressure on us to make all these items at top race winning levels. If any part of that puzzle is not at top level, it will pull down the performance of the total package.

FC: We just returned from our second large event here in the States, the Halloween Classic. Over 200 entries total with a good sized F1 class. Again the WTF-1 went 1-2 with Brian Wynn taking the victory (and T.Q.) and Ohio driver, Wayne Gerber, finishing 2nd. Another great result to report, I am quite pleased with the results.

RCF1: Thanks for sharing this with our readers Frank.