In the first part of this guide we examined setup adjustments which are directly relevant to F1 RC cars. This section contains an explanation of more advanced concepts and adjustments many of which can not be changed on an F1 car without the use of after market parts (hop ups).

Back to Setup Explained

The following text was reproduced with permission of www.rc-setup.com a supplier of RC Setup Equipment. Some of the definitions found here were based on text found on wikipedia (www.wikipedia.com). Feel free to print these out and / or distribute this document as long as you do not alter this copyright notice. 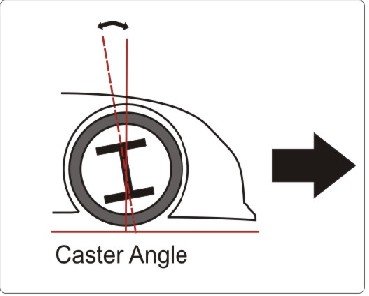 Caster (or castor) angle is the angular displacement from the vertical axis of the suspension of a wheel in a car, measured in the longitudinal direction (angle of the kingpin when looked at from the side of the car). It is the angle between the pivot line (in a car - an imaginary line that runs through the center of the upper ball joint to the center of the lower ball joint) and vertical. Caster angle can be adjusted to optimize a car's handling characteristics for particular driving situations.

The pivot points of the steering are angled such that a line drawn through them intersects the road surface slightly ahead of the contact point of the wheel. The purpose of this is to provide a degree of self-centering for the steering - the wheel casters around so as to trail behind the axis of steering. This makes a car easier to drive and improves its straight line stability (reducing its tendency to wander). Excessive caster angle will make the steering heavier and less responsive, although, in off-road racing, large caster angles are used to improve camber gain in cornering. 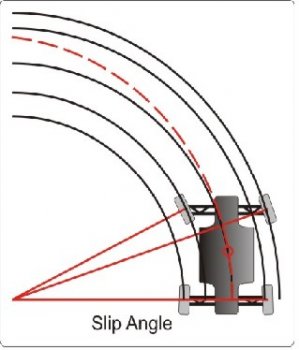 Slip angle is the angle between a rolling wheel's actual direction of travel and the direction towards which it is pointing. This slip angle results in a force perpendicular to the wheel's direction of travel -- the cornering force. This cornering force increases approximately linearly for the first few degrees of slip angle, and then increases non-linearly to a maximum before beginning to decrease (as the wheel slips).

A non-zero slip angle arises because of deformation in the tire. As the tire rotates, the friction between the contact patch and the road result in individual tread 'elements' (infinitely small sections of tread) remaining stationary with respect to the road.

This tire deflection gives rise to the slip angle, and to the cornering force.

Because the forces exerted on the wheels by the weight of the vehicle are not distributed equally, the slip angles of each tire will be different. The ratios between the slip angles will determine the vehicle's behavior in a given turn. If the ratio of front to rear slip angles is greater than 1:1, the vehicle will tend to understeer, while a ratio of less than 1:1 will produce oversteer. Actual instantaneous slip angles depend on many factors, including the condition of the road surface, but a vehicle's suspension can be designed to promote specific dynamic characteristics.

A principal means of adjusting developed slip angles is to alter the relative roll front to rear by adjusting the amount of front and rear lateral weight transfer. This can be achieved by modifying the height of the Roll centers, or by adjusting roll stiffness, either through suspension changes or the addition of an anti-roll bar.

The roll center of a vehicle is the imaginary point marking the center of where the car will roll (when cornering) when looked at from the front (or behind).

The location of the geometric roll center is solely dictated by the suspension geometry. The official definition of roll center is: "The point in the transverse vertical plane through any pair of wheel centers at which lateral forces may be applied to the sprung mass without producing suspension roll".

The geometric roll center of the vehicle can be found by following basic geometrical procedures when the vehicle is static:

Running parallel, equal-length suspension arms will result in a fixed roll center. This means that as the car leans over, the moment arm will be forcing the car to roll more and more. As a general rule of thumb, the higher the center of gravity of your car, the higher the roll center should be to avoid a roll-over.

Bump Steer is the term for the tendency of a wheel to steer as it moves upwards through the suspension travel. On most cars, the front wheels usually toe-out, that is, the front of the tire moves outwards, as the suspension is compressed. This gives roll under steer (when you hit a bump when turning, the car tends to straighten). Excessive bump steer increases tire wear and makes the vehicle twitchy on rough roads.

In a bump, both wheels rise together. In roll one wheel rises as the other falls. Typically this produces more toe in on one wheel, and more toe out on the other, thus giving a steering effect. In a simple analysis you can just assume that the roll steer is the same as bump steer, but in practice things like the anti-roll bar geometry have an effect that modifies it.

Bump steer can be made more toe-out in jounce by lifting the outer ball joint or dropping the inner ball joint. Usually only small adjustments are required.

Other Important factors to consider

Any vehicle may understeer or oversteer at different times based on road conditions, speed, available traction, and driver input. The design of a vehicle, however, will tend to produce a particular "terminal" condition when the vehicle is pushed to and past its limits of adhesion. "Terminal understeer" refers to a vehicle which, as a function of its design, tends to understeer when cornering loads exceed tire traction.

Terminal handling balance is a function of front/rear relative roll resistance (suspension stiffness), front/rear weight distribution, and front/rear tire traction. A front-heavy vehicle with low rear roll stiffness (from soft springing and/or undersized or nonexistent rear anti-roll bars) will have a tendency to terminal understeer: its front tires, being more heavily loaded even in the static condition, will reach the limits of their adhesion before the rear tires, and thus will develop larger slip angles. Front wheel-drive cars are also prone to understeer because not only are they usually front-heavy, transmitting power through the front wheels also reduces their grip available for cornering. This often leads to a "shuddering" action in the front wheels which can be felt in the car as grip is suddenly being changed from planting the engines power on the road and steering.

Racing drivers, on asphalt surfaces, generally prefer a neutral condition (with a slight tendency toward understeer or oversteer, depending on the track and driver preference) because both understeer and oversteer conditions will scrub off speed while cornering. In rear wheel drive cars understeer is generally faster on a circuit because the rear wheels need to have some grip available to accelerate the vehicle out of the turn.

Wheel rate is the effective spring rate when measured at the wheel. This is as opposed to simply measuring the spring rate alone.

Wheel rate is usually equal to or considerably less than the spring rate. Commonly, springs are mounted on control arms, swing arms or some other pivoting suspension member. Lets assume the spring moved 0.75 inches, the lever arm ratio would be 0.75 to 1. The wheel rate is calculated by taking the square of the ratio (0.5625) times the spring rate. Squaring the ratio is due to two effects. The ratio applies to both the force and distance traveled.

Anti-dive and Anti-squat are expressed in terms of percentage and refer to the front diving under braking and the rear squatting under acceleration. They can be thought of as the counterparts for braking and acceleration as Roll Center Height is to cornering. The main reason for the difference is due to the different design goals between front and rear suspension, whereas suspension is usually symmetrical between the left and right of the vehicle.

Anti-squat is the counterpart to Anti-dive and is for the rear suspension under acceleration.

The Circle of Forces is a useful way to think about the dynamic interaction between a vehicle's tire and the road surface. In the diagram below we are looking at the tire from above, so that the road surface lies in the x-y plane. The vehicle that the tire is attached to is moving in the positive y direction. 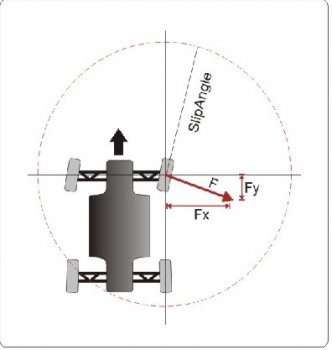 In this example, the vehicle would be cornering to the right (i.e. the positive x direction points to the center of the corner). Note that the plane of rotation of the tire is at an angle to the actual direction that the tire is moving (the positive y direction). That angle is the slip angle.

The magnitude limit of F is limited by the dashed circle, but it can be any combination of the components Fx (turning) and Fy (accelerating or braking) that does not exceed the dashed circle. If the combined Fx and Fy forces exceeds the boundaries of the circle, the tire looses grip (you slide or spin out).

In the example, the tire is generating a component of force in the x direction (Fx) which, when transferred to the vehicle's chassis via the suspension system in combination with similar forces from the other tires, will cause the vehicle to turn to the right. The diameter of the circle of forces, and therefore the maximum horizontal force that the tire can generate, is affected by many things, including the design of the tire and its condition (age and temperature range), the qualities of the road surface, and the vertical load on the tire.

Oversteering cars have an associated instability mode, called the critical speed. As this speed is approached the steering becomes progressively more sensitive. At the critical speed the yaw velocity gain becomes infinite, that is, the car will continue to turn with the wheel held straight ahead. Above the critical speed a simple analysis shows that the steer angle must be reversed (counter steering). Understeering cars do not suffer from this, which is one of the reasons why high speed cars tend to be set up to understeer.

Thank you to www.rc-setup.com for granting permission to reproduce the above.
Back to Setup Explained