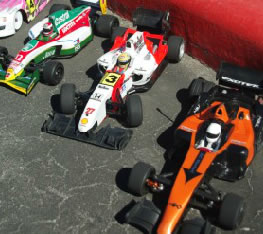 The 2013 West Coast Asphalt Assault at WCMRC in Perth was run on Sun 3 Feb and featured some very close racing.

WCMRC have adopted the National Rules but with 17.5 blinky at club level. WCMRC have the longest straight of any track running F1 in Australia at 62m. From memory there is also a banked corner into the sweeper making it a very fast straight/sweeper combination.

There were more entries in F1 than there were in Mini, Stock or Modified showing how popular F1 is in WA.

It was a very close battle with three different drivers winning the three Finals.

In the last Final only 4 seconds separated the top 4 racers.

Well done to the club for getting the results up so quickly.